HCM CITY – Earlier this year, a 57-year-old man from Tay Ninh province was desperate to quit smoking after suffering a stroke. For treatment, he chose the Institute of Traditional Medicine in HCM City where doctors recommended he receive ear acupuncture to stop his cravings for cigarettes.

The treatment consisted of four one-millimeter and 1.5-millimeter needles inserted into four acupuncture points on the outer surface of the ear for a period of three to four days.

“After three treatments on the same spots, my cravings stopped even when I was in front of smokers,” said the man, who declined to reveal his name.

He continued his treatment to make sure he wouldn’t smoke again.

Another patient, a 23-year-old man from Tân Bình district, who did not want to reveal his name, received the same acupuncture treatment, which curbed his food cravings.

“I smoked for two years. Whenever I was sleepy, I smoked to stay awake. And at work, a lot of people around me didn’t like the smell of tobacco. So I was determined to give it up,” he said.

The inserted needles are kept in one ear for three or four days, after which the patient returns to the hospital where doctors remove the needles and then perform the same procedure on the other ear.

“Whenever addicts experience cravings, they are told to press acupuncture points on the outer surface of the ear,” Quang said.

At the institute, patients are advised to meet with doctors for counseling to ensure they are following the procedures.

This year, the institute conducted research from April to June on the effectiveness of using auricular acupuncture on 35 smokers. In the group, nearly 60 to 65% of them were able to quit smoking.

In 2016, Nguyễn Thị Tân, Dean of the Faculty of Traditional Medicine at Huế University of Medicine and Pharmacy, conducted research on 300 smokers with Kyung Hee University in South Korea and the Health Department of Quảng Nam province on auricular acupuncture.

The result showed that 66 percent quit smoking after five auricular acupuncture sessions. The research was sponsored by South Korea’s Ministry of Health and Welfare.

Last month, at a conference on the treatment of tobacco addiction with a combination of traditional and modern medicine, Trương Thị Ngọc Lan, deputy director of the institute, said that auricular acupuncture helps to quickly reduce the need.

The therapy should be used along with other types of traditional treatments because smoking can lead to other health disorders.

“Quitting smoking is not difficult, but how to prevent re-addiction is very important,” Lan said. 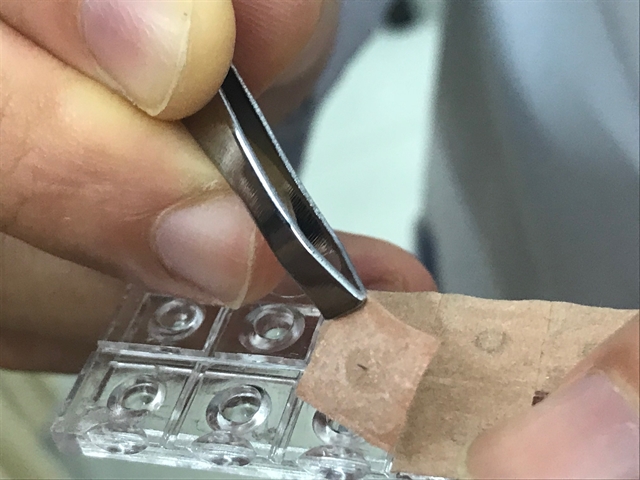 Tobacco addiction is a serious public health problem in Việt Nam and the demand for treatment is high.

At least 70% of smokers want to quit, and two-thirds of people who have started smoking again have sought treatment, according to the institute.

Dr. Trần Thái Hà, head of the general planning division at the National Hospital of Traditional Medicine, said counseling for tobacco dependence treatment with and without drugs doubles the success rate of smoking cessation.

Quang said the cost of auricular acupuncture is low and therefore accessible to many people. The treatment does not cause any side effects and can be used repeatedly.

In a previous conference, the institute provided training on the treatment to doctors from the city and other provinces in the southern and central highlands regions.

According to a global adult tobacco survey conducted in 2015 by the Ministry of Health in collaboration with Hanoi Medical University and the General Statistics Office of Việt Nam), more than 45% of men, 1.1% of women and 22.5% in total (15.6 million adults) smoked tobacco in Vietnam.

The survey found that 29% of those who had ever smoked (6.4 million adults) had quit, while 5.2% of smokers (0.8 million adults) said they were planning to quit within the next month. —VNS